This site isn't about me.........it's about wonderful guitars that used to be trees and the music that they allow us to produce. As for myself, if i must, I've been wrapped up in music since I was young.  (no prodigy though !) Originally a drummer (see pic), 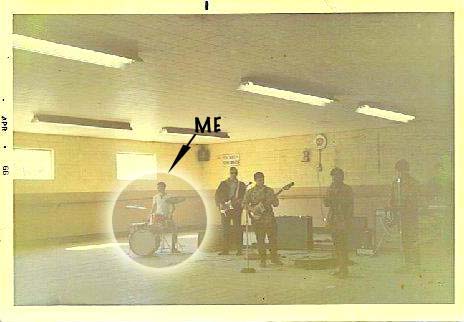 I moved to the guitar having been inspired by the guys around me who played them.  At 16, I went to the original Woodstock in Bethel, it being only about 10 miles from home in New York. Hardly remember any of it !! 18 brought the draft and a tour of duty during Vietnam, all the while infused in the music of the time and the "tea" of the day. Phil Ochs, Bob Dylan, Tom Paxton, John Sebastian, Neil Young, The Grateful Dead, Crosby, Stills and Nash.....all formed my melodic background.  (by the way, the pic at right is dated 1966 and the one on the left is at our local Plaxtock, with my daughter, Immy)

I never felt that I had to go somewhere with the guitar, as the simple sound of melodic chords was enough to bring me great comfort and happiness and they still do. I am enamoured of those who know "the fretboard" inside and out......as an extension of their minds and eyes.....and ears. I am convinced that the guitar with all of it's chordings, alternate tunings and various possible keys is the most complex and deepest of all the stringed instruments.

It has brought to me a constant source of joy, expression and comfort over the years. I hope that the guitars that I have to offer will have the same effect on you. Songs from the Wood.