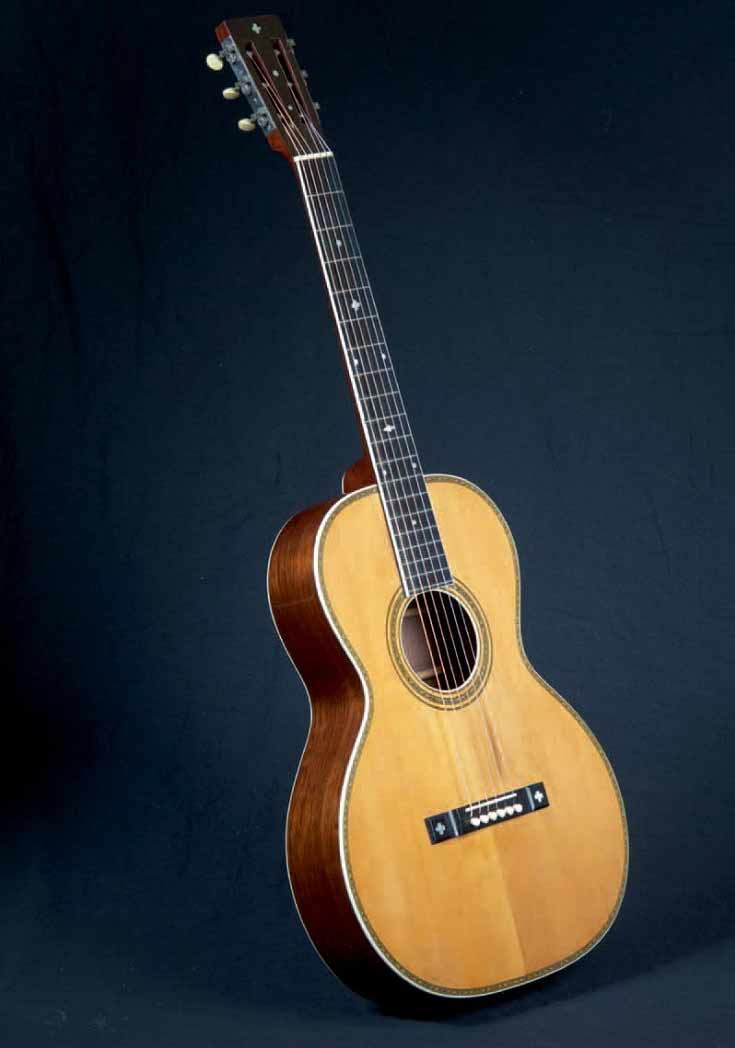 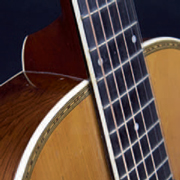 Once in a while you come across an instrument that you have heard of but never thought you would have in hand. For me, this is one of them: the 1928 Larson Brothers’ Stahl Style 6. The Larson brothers, Carl and August, worked in Chicago where they bought the Maurer Co. in 1900. They carried on there until 1944, where their house brands were Maurer, Euphonon and Prairie State, and they built for catalogue companies like Stahl and Co.

Stahl’s custom order guitars were stamped with his brand on the backstrip and almost all of Stahl’s late 20s guitars were made by the Larson Brothers, including this example. At this point in time, a catalogue company was not what we think of today. The guitars built by the Larson Brothers for Stahl and Co. were revolutionary in their designs and construction – top shelf stuff. The Style 6 is a 000 body style having a 15 1/4” bottom bout with a shallower body depth (3 3/8”) than a Martin 000.

Slim and sleek, the rims and back are of solid, beautifully grained Brazilian rosewood and the top is a solid piece of Adirondack spruce. The body and neck are bound in white with multi-coloured purfling in a dot-dash pattern of great detail and quality at the body edges, the soundhole and as a backstrip.

“Tonally, it’s amazing. Not huge, but sublime, with subtleties rarely heard in any guitar”

The ebony fingerboard and bridge are both inlaid with large snowflake and dot designs. The crispness and detail of the bridge design is a pure delight, retaining the original bridge pins with their trademark backward slant, a characteristic of the Larsons’ work. The tail of the fingerboard is thicker than the side binding, which gives the effect of black, white and black… dramatic and stylish.

The tuners are French polished steel and the peghead is veneered in a holly-type wood that seems to have originally been stained an ivy green and has now faded to a more brown tone.

Graduated dot and snowflake inlays complete the slot peghead. Overall, the guitar is made with an attention to detail even C.F Martin & Co. would envy. It’s as much a work of art as it is a musical instrument. Now for the inside: what a delight. The Larson Brothers used steel string X-bracing long before C.F Martin & Co., and this example is sublime in its interior appointments. All the vertical elements inside are extremely thin and tall with a thin, maple rectangular bridge plate. 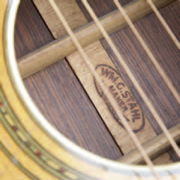 The X-bracing is set back and built as a laminate with Brazilian rosewood as the core material sandwiched between two bits of spruce. What an amazing concept! As a result, the top is perfectly flat with no stress deflection or cracks. The neck is a modified V with a 1 3/4” nut: a fingerpicker’s dream. Tonally, the guitar is simply amazing. Not huge, but sublime, with subtleties rarely heard in any guitar.

Piquant is the word here: articulate, crisp and responsive. Warm haunting backtones with the typical 000 projection give it a mature tonal image. The Larsons brought to the plate innovations you wouldn’t see anywhere else at that time or since: true innovators!