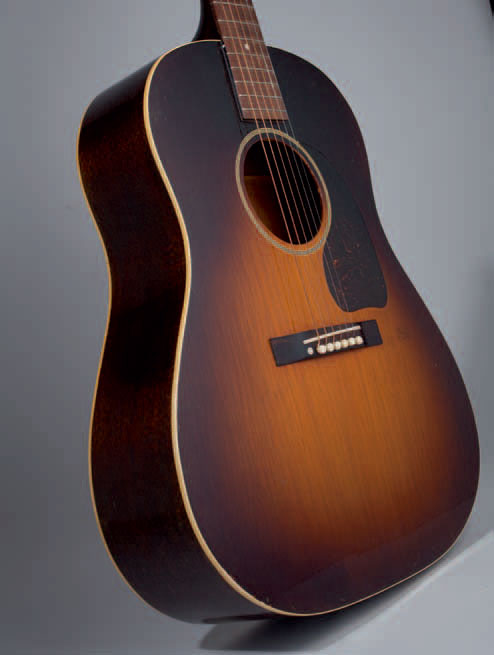 Before World War II, Gibson was known mostly for its brilliantly designed and decorated archtop guitars; hulking beauties that backed up jazz bands of the era. They also made some wonderful blues machines such as the L-00, the L1, and the L-2 with gold metalflake bindings and jester hat logos. Yep, they made some magnificent guitars in that era. But none of these would compare to the guitars they would make during the war.

Wartime economics dictated that Gibson should be contributing to the war effort – not making musical instruments. They actually didn’t acknowledge that they were making instruments until well after the war. Almost all their male staff were off fighting for Uncle Sam, or building war-related material. What was left was a skeleton crew of experienced men… and a whole building full of newly hired gals in the guitar department. And make guitars they did.

The beginning of the war was also the beginning of two new models for Gibson, the J-45 and the Southerner Jumbo. This issue’s feature looks at a Banner J-45 from this era. Stylistically not dissimilar to the older J-35 and the J-55, the new models introduced a slightly different bracing system and new structural features that would go on to form part of their enduring reputation.

Due to a lack of resources, the one thing common to all war-era Banner Gibsons  is their inconsistency.  The workforce was not averse to diving into the basement to find scraps of timber to complete a guitar, so learning about this period at Gibson is a lesson in variable expectations.

The Banner J-45 is built as lightly as physically possible, predominately with solid mahogany rims and back, and a red spruce (Adirondack) top and bracing. Mahogany or maple necks were used, as well as five-piece laminated necks, primarily made of maple. Mahogany tops can be found at times, but always we find Brazilian rosewood boards and bridges. Tops can be found in two-piece and four-piece construction with variable binding combinations.

Importantly, as noted in a recent publication by John Thomas entitled Kalamazoo Gals, war-era Banner Gibsons were primarily built and finished by a female workforce with little experience. They caught on quickly, resulting – in my opinion – in the finest batch of guitars Gibson has ever built. There may be earlier individual guitars that equal the Banner reputation, but as an era nothing can beat a good old Gibson Banner guitar.

They made six banner models, four of which were flattops and, as the war ended, the Banner headstock logo disappeared into obscurity. But, as attested: “only a Gibson is good enough”.

This J-45 has a beautifully painted red spruce top plank in a ruddy, sunburst hue. The rims and back are solid Honduran mahogany as is the neck, which is one-piece. You can find them on rare occasions with maple rims and backs and multiple ply- neck construction. This particular example has a truss rod, but many ‘war’ J-45s didn’t because Gibson didn’t want to be seen using steel uneconomically, given the war effort. Where steel rods were not used, Gibson filled the vacant run with a piece of maple. If you see a guitar with a flat triangular shape under the black paint where the truss rod cover should be (like someone filled the truss rod cut-out and painted over it), it’s a Gibson with a maple rod.

Internally, our example has forward- shifted, scalloped X-bracing, which is extremely light. A small maple bridge-plate secures the bridge from below. The bridge is rosewood with the typical pearl dot covered screw and nut, and the fingerboard is also rosewood. Tuners are open-back Klusons with peened-over shaft ends. The guitar boasts simple single-layer purfling at the body edges, and six layers at the soundhole. The neck is meaty, having a 13⁄4” nut and a very full D-shaped radius. Not quite what we call a ‘baseball bat’ neck, but close. This is partially why Banners sound so good; the necks are always substantial and serve to transmit so much more sound vibration to the body than a lighter neck would. The pickguard is faux- tortoise and in a lovely, crack- free teardrop form.

From a sound perspective, i have never had a ‘bad’ Banner. They can vary a lot but they are never disappointing. Their incredible volume is the first thing that hits you, just bags of it. Then you notice the back-tones and the residual swell emanating from the soundhole. The whole guitar vibrates with deep, colourful sounds and a characterful palette. Its sustain is just right, dying back in a space of time that allows you to play on without dampening other than for effect. It has a bite when you want it and a clarity that is unusual with so much power. Press this guitar and it will give you all the headroom you would ever need, yet with the crisp character of a mahogany top. I’ve had singer/songwriters grow bags of songs from these venerable old boxes of wood and never have i known someone who didn’t like them. They may have been overwhelmed by the neck size or the pure power they possess, but without exception they have been impressed by their character and presence, musically and visually. A sense of awe isn’t overstated.

I had the privilege of buying a bruised and battered old Banner 45 from a picker friend of mine in Memphis who conveyed to me the story that it was found on top of a big old refrigerator in a closed up gas station in Oklahoma that hadn’t been used since the 50s. It was grey with dust and dirt. It was rashed and scarred with splits. The bridge was coming off, tuners rusted in place. When I took it out of the case upon arrival my eyes lit up and my heart raced. Why? Because i know that the played ones are the best and sometimes the cracked ones are even better.

True to form this old gal didn’t let me down. Once nursed back to health, she could sing with the angels and growl with the bears. She now tours the world with a wonderful friend Ben Holland; opening shows for the lovely Joan armatrading. He has never sounded better.