It’s hard to find a guitar model that has as many different opinions expressed about it as the gibson 200 series: good, bad and indifferent. But i have also found over the years that each generation of development in the sJ/J 200’s litany of changes has created a viable and relevant instrument for its era that did its job more than adequately and, most of the time, with great attitude and character.

So for this issue, i’ve decided to share some thoughts on a rare example of this famous lineage: a 1959 gibson J-200. Originally very expensive (actually priced above the ’59 Les Paul), the ‘59s are iconic in their beautiful burst fi nishes and hand-carved Brazilian rosewood mustache bridges. Only 97 of these behemoths were created in 1959, so one wonders how many have survived. They still have visages of their past heritage: tapered headstocks and beefy three-piece maple and rosewood core necks, which arebig but caress the hand in a most comfortable manner. the neck measures 1 11/16” at the nut, which, with a full c radius and a sublime taper, makes it inherently playable.

The drop in saddle, sided by pearl inlays on a handcarved Brazilian rosewood moustache bridge, is iconic and much revered for its thrifty use of materials and its non-invasive footprint, along with its originality of design. The solid figured maple rims and back are mastergrade quality and have mellowed to a sweet, honey coloured patination while the spruce top is a beautifully painted sunset plank that is a visual delight. the rims, neck and back of the guitar are burst as well, which is a considerable upgrade that not many gibsons possess. the Brazilian fingerboard is pearl inlaid with the classic ‘cloud’ motif and bound as well.

The hand carved floral pickguard perfectly complements the coloured patterns that the rest of the guitar possesses. The black enameled bound headstock with the inlaid pearl Keystone and gibson logos are all supported by the classic Kluson single line ‘snot green’ tulip head gilt tuners. so it’s a stunner, yes, but what does it sound like? i’ve had 200 series gibsons from 1950 through the 60s and they all have their own particular sound. the early sJs from the fi rst few years of the 50s have forward shifted bracing built much lighter than the later cousins. add to this a much thinner neck than the later 50s examples and these guitars have a sound that is more like a “great acoustic guitar” rather than what i have come to expect to hear from a classic 200. super loud and fat, they sound more like a reat dreadnought than a maple bodied jumbo, which means they are incredible instruments, but to my ear not classic 200s.

Fast forward to the 60s and we find changes in construction and design that have earned this era of 200s the name of ‘Whispering giants’. and as that may be true in relation to their predecessors, they are creations of their moment and do just what they were supposed to do: be substantial rhythm guitars for music performed by musicians not unlike the everly Brothers. Boxy, thumpy and dry, they make incredible rhythm machines to back up vocals and to drive the music from a back seat. 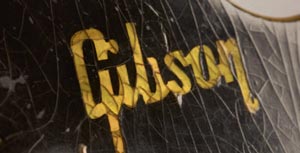 “To my ear, it is the absolute classic sounding and looking J-200…Voluminous waves of sound emanate from its soundhole with warm sustaining tones that are full of harmonics and backtones” 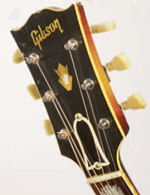 We as players simply need to put them in perspective to understand their contribution to their long lineage. So, what about the late 50s J-200? To my ear, it is the absolute classic sounding and looking J-200. 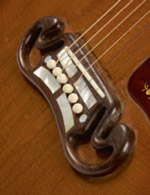 It’s still obviously a maple bodied guitar but it presents that characteristic in its best light. Voluminous waves of sound emanate from it with warm sustaining tones that are full of harmonics and backtones. The box is braced in a way as to balance the sound in an even and enduringly responsive manner. The bass is prodigiously present with a rigorous midrange and trebles that are ever present and  clear but never strident. Fat and controlled with a warm richness that melts the heart.

“To my ear, it is the absolute classic sounding and looking J-200…Voluminous waves of sound emanate from its soundhole with warm sustaining tones that are full of harmonics and backtones” This is in my book what we all wished our 200 sounded like. The late 50s generation of J-200 is the classic era of the big maple box when it comes to our visual and sonic depictions of Emmy Lou Harris and her big 200 strapped around her neck. She didn’t just play it for the looks. And neither did Johnny Cash, or Eric Clapton, or Pete Townshend or Neil Young. 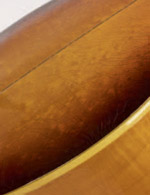