The 15 and 17 series of martin guitars have been somewhat shunned as the less desirable bottom end of martin’s production during the pre- and post-war years. it is true that they were the least expensive line that martin made, up through the 1960s, but they never should have been looked down upon as something lesser. contrary to belief, and true to martin’s dedication to their business principles, these little guitars with the brown tops were made as precisely and with as much attention to craftsmanship and quality as any other martin guitar of their day.

Let’s get some background: the 0-15 was martin’s absolute least expensive model, first appearing in 1935 as martin’s answer to the financial limitations presented by the great Depression. The 14-fret 0-15 was only ever produced as an 0 model. It was made between 1935 and 1961 with a short halt to production during 1944-47. It featured a solid mahogany top, sides and back with no binding and a very simple black, white, black soundhole inlay. the board and rectangular bridge were rosewood and the fret inlays were single dots at the fifth, seventh, ninth and 12th positions.

The finish was a thinner mahogany stain under a semi-gloss cellulose finish. As for the 17 series, production of this mahogany topped series began in 1922 only as a 2-17 model. It wasn’t until 1934 that we see the 14-fret 0 and 00 models enter production on a catalogue basis. With a solid mahogany top, rims and back and a rosewood board and rectangular bridge, the 17 model differed from the 0-15 model by having double dots at the seventh and 12th positions, along with a glossier finish over a dark brown walnut-coloured stain.

It still had no bindings at the edges and carried the same black, white, black soundhole inlays. Now back to our 1935 0-17. The much coveted secret about this guitar is its prewar heritage. The post-war examples are wonderful guitars and have matured to the point where their sound has opened up to become really rewarding. But the pre-war examples are a different kettle of fish all together. they are every bit as good as their spruce topped cousins and offer a completely different sound and feel.

Firstly, the pre-war examples are all scallop braced, much like the spruce topped guitars from the same era. this alone is a feature that would catapult them into a completely different league relative to the post-war examples where the bracing becomes flat topped. Combine two scalloped tone bars with small maple bridge plates, super slim X-bracing and wafer thin mahogany tops and you get a guitar that is crisp, loud and responsive. They hold a lovely sustain and possess the great haunting back tones that we all love. surprisingly, they also have the standard tuner of the day, not some cheaper example. 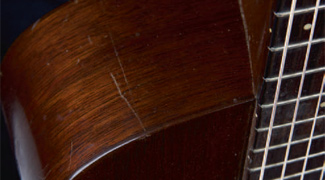 “Combine two scalloped tone bars with small maple bridge plates, super slim X-bracing and wafer thin mahogany tops and you get a guitar that is crisp, loud and responsive… with a lovely sustain and the haunting back tones that we love” 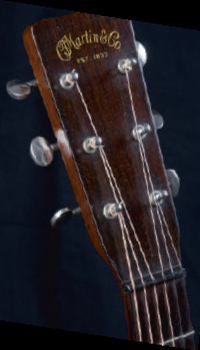 Nickel plated buttons and plates with 6:1 ratios make for great and accurate tuning and provide further testament to Martin’s unwillingness to compromise quality for profit. Where Martin saved money was in places that had no bearing on the quality of sound – and they are still a bit of a sleeper relative to their spruce topped cousins. 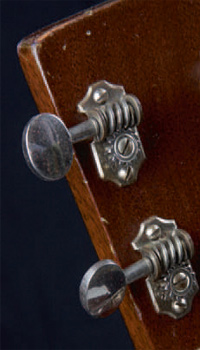 With the current trend toward smallbodied guitars, the pre-war Martin 15 and 17 series are true classic heavyweights in their category and are more relevant than ever. They provide the contemporary player with a sound that is ancient and contemporary – providing a true variant on the traditional spruce topped models that these are often compared with.

We see in the contemporary guitar market of today that Martin and many other makers have “looked back” in an attempt to recreate and honor the pre-war mahogany topped beauties of that era. Nothing, however, will ever replace the real thing. 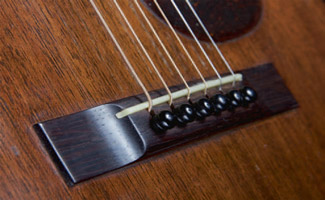